The Moon is beautiful tonight

In May of 2018, our newly established Artist-in-Residence program was announced and presented at the Academy of Fine Arts Nuremberg, whereupon the students had until mid-June to apply with their concept drafts. The winner of this fellowship was given the opportunity to realize their concept with free access to material, production possibilities and the technical know-how in the Hüttinger workshops. The final project then premiered at the Blaue Nacht (lit. The Blue Night – The Long Night of Art and Culture) in spring of 2019 in Nuremberg.

The jury, which consisted of representatives of the academy, the head of the project office of the Cultural Department of the City of Nuremberg, and Hüttinger managing director Axel Hüttinger, intensively evaluated the submitted designs based on idea, creativity and feasibility. All the sketches had great potential and impressed the jury with their various aspects and inventiveness, which did not make it easy for the jury to make a decision.

Ultimately, the 'Moon is beautiful tonight' by 26-year-old Yanran Cao convinced the jury of four. The Chinese student, who has been studying Fine Arts at the academy since 2015, submitted an idea for a kinetic cube. Based on this concept, she continued to work on it and produced a prototype in the Hüttinger workshops.

The Moon is beautiful tonight:
A large, initially static mirror cube performs aesthetic and flowing movements. Through the harmonious, soothing interplay of images, sounds of the sea, light reflections and magical kinetic movements, it captivates its onlookers. It invites to dream, reflect or take a walk in its "mirror garden".

The guiding idea behind our Artist-in-Residence project is to combine art and science and let them interact with each other. Through this integration of natural sciences and art, the thesis is to be taken up that natural science also has an aesthetic dimension and art also a cognitive dimension.
After realizing projects with renowned artists such as André Heller, Jennifer Townley and Anthony Howe in recent years, Hüttinger is also giving a young, up-and-coming artist the opportunity to exploit her artistic potential and realize her work with the support of German engineering. 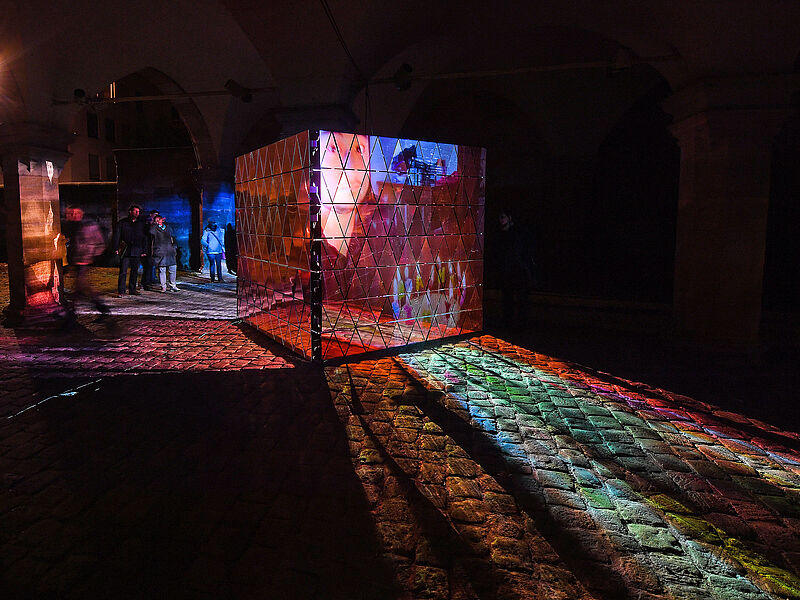